Distinguised service in two World Wars, and a lengthy career with Canada's peacetime army, was the proud record of Henry Thomas Shepherd, M.B.E. who died in Sunnybrook Hospital on July 24th following a heart attack. He had been ill for the past few months, and had been recuperating at home from a previous heart attack when illness struck again.

One of the district's best known soldiers, he received the M.B.E. decoration in the King's honour list during the past war while serving as deputy fire marshal, attached to the fire prevention service station at Monteith.

Born in Stewarttown, son of the late John Henry and Sarah Hartley Shepherd, he lived there until moving to Georgetown in 1921. He attended public school in Stewarttown, at one time drove coaches for the old J.A. Willoughby livery stable, and delivered the mail from Stewarttown to Ashgrove; and for the past 49 years was an employee of Alliance Paper Mills Ltd.

Mr. Shepherd enlisted with the Halton Volunteer Rifles in 1911 and at the age of 19 when World War I broke out, went active with the 58th Battalion. He was twice wounded during overseas service, and after the war re-enlisted in the Halton Rifles, later the Lorne Rifles Scottish. He held the rand of WO1 on completion of service in this unit.

When the Lorne Rifles and Peel & Dufferin Regiment united in 1936, he held the rank of regimental sergeant major. In September, 1940 with the outbreak of the second war, he re-enlisted for active service reverting to private's rank.

Later he was given the rank of company sergeant major and served at Newmarket Training Centre until his appointment as a fire marshal.

Mr. Shepherd was for a number of years an active fireman, serving as chief of the local brigade until his retirement upon joining the army in World War II.

Mr. Shepherd took a keen interest in affairs of Branch 120, Canadian Legion, and had held many offices in that organization. It was traditional that he serve as parade marshal at the rememberance day parades, and the fine appearance of units on parade on these occasions was in no little part due to his skilled direction.

He was a member of the Anglican church and of the 25 Year Club of Alliance Paper Mills.

At the time of his recognition in the King's Honour List, he was honoured by the local Legion branch with a Certificate of Merit, first to be so presented. 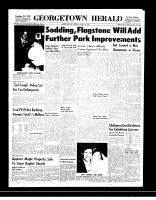