Full Text
OBITUARY
MRS. SAMUEL AULT
Catharine V. Loucks, widow of the late Samuel Ault, of Morrisburg, and mother of Dr. E. D. Ault, Acton, passed peacefully away on Thursday, October 8th, at the family residence, Morrisburg, at the ripe old age of 90 years. Both Mrs. Ault and her husband were early settlers of Canada, and both were descendants of the United Empire Loyalists. Their ancestors came from their former homes along the Mohawk River, in New York State, in 1784. Mrs. Ault was a daughter of Richards Loucks who opened a store in the limits of the present county of Dundas in 1787. Mr. Ault was a grandson of Jacob and Christianne Ross, of Osnabruck, the latter of whom outlived nearly all the U.E. Loyalists of her time.
Croil's History of Dundas County, published in 1861, records the following interesting facts: "Her descendants to the third generation oftimes listened to the thrilling story of her coming to Canada and the subsequent hardships and trial to which she had been subjected. Her grandson, Mr. Samuel Ault, related to us the following touching incident: "She lived with her father at Schoharrie, near the Mohawk in New York State. Her mother was dead. Her father was away from home. Christianne was seventeen, her sister Eve was fifteen and they had a little brother of five or six. The girls became alarmed at the prolonged absence of their father. At last, mounted on horseback, he appeared in sight riding in great haste toward the house. The little boy clapped his hands and the children ran to the door to meet their father. Scarcely had the children crossed the threshold when a party of Indians in ambush fired a volley before any explanations could be given or received. The father, and a cousin who accompanied him, fell from their saddles and before the breath had left their bodies, their scalps were taken off. The house was plundered, the buildings burned and the terrified children carried off. The little boy cried "I want my father! I want to go home to my father." The Indians became enraged with the pitiful cries of the little fellow, and ordered the girls to go on with the squaws. The Indians despatched the little fellow with a tomahawk and his sisters saw no more of him, save his reeking scalp, which was held before them with a warning that they should be quiet. They were five weeks marching to Fort Niagara. Here the two girls were sold to Sir John Johnston, a British Commander. He took the two sisters to Montreal and employed them as servants in his home. At the close of the war Christianne married Jacob Ross, a discharged soldier, and they settled on a farm near Cornwall, drawn from the Government. Mrs. Ross lived to the patricachal age of 98 years."
The late Mr. and Mrs. Ault were the parents of four sons and four daughters, of which the following survive: Dr. E. D. Ault, Acton; Wm. H. Ault, Ottawa; Mrs. C. C. Rae, Ottawa; Mrs. Ralph E. Gibson and Misses Ada and Mary, of Morrisburg. Mrs. Ault was a staunch member of the Presbyterian Church.
Media Type
Genealogical Resource
Newspaper
Item Type
Clippings
Date of Publication
22 Oct 1914
Last Name(s)
Ault
Loucks 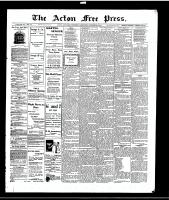