Full Text
KILLED ON C.P.R. NEAR MILTON
Frank Hilbert, a London Man, Met
Awful Death last Thursday
HE DIED IN ABOUT AN HOUR
Frank Hilbert, of 164 Ann Street, London, Ont., met a terrible death last Thursday evening. Hilbert was walking along the tracks between Milton and Campbellville, when he was run down by the C.P.R. Goderich train eastbound. At the same time the Chicago Flyer was passing west at a furious rate of speed.
The Goderich train drew up, and the man's battered body was placed in a car, life almost extinct. In spite of all the care and attention that could be given him, and the attendance of Doctor Anderson, of Milton, Hilbert died before he reached Toronto.
Frank Hilbert, London, was in business with his brother under the firm name of the Canada Jobbing Company and travelled about the country most of the time. He was twenty-five years-old and unmarried.
Media Type
Genealogical Resource
Newspaper
Item Type
Clippings
Date of Publication
12 Mar 1914
Last Name(s)
Hilbert 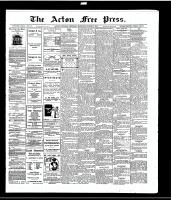