Full Text
Born In Acton in 1832.
There passed to his reward, on June 5th, at his home, Grand Rapids, Mich., in the person of George Washington Adams, one whose early life was closely connected with Acton's history. Mr. Adams was born at Acton - one of the first children born here - on July 4, 1832, and had therefore reached the ripe age of seventy-five years. His father was the late Rev. Ezra Adams, one of the early pioneer ministers of the Wesleyan Methodist church, who lived to be over ninety years. (Rev. Ezra Adams was a brother of Rufus and Zenas Adams.) George W. Adams was one of a family of ten children, five sons and five daughters, one brother and one sister of whom survive him - Dr. John G. Adams, dentist, Toronto, and Mrs. (Rev.) Thos. Culbert, of Toronto. Four of Mr. Adams' sisters married Methodist ministers, Rev. Thos. Hurlburt, Rev. Matthew Swann, Rev. Jas. E. Dyer and Rev. Thos. Cuthbert. At the age of twenty he married Isabella Jane Lowes. Five children were born to them. The widow and two children of whom survive: Abner J. living in the distant west, and Miss Emma who so lovingly and devotedly has cared for her aged parents at home. For fifty-five years this aged couple enjoyed each other's society and shared the varied experiences of life, now to be separated, but with the brightest hopes of a reunion in heaven, never to part. In 1871, the deceased went to the United States and settled in North Carolina. In 1877 he removed to Grand Rapids, Mich., which has been his home the past twenty-nine years. Shortly after his marriage he was converted in Hanover, Ont., and united with the Mehtodists. He had filled all the offices of the church, outside of the ministry, and was an active, devoted spiritual Christian man. He studied his bible, lived a life of prayer: "his lamp was trimmed and burning." He was regarded in the highest terms as father, husband, and Christian, a man full of faith, a man of clean life, one who knew not the taste of intoxicants or tobacco in any form, a bright and shining example to the younger generation. His remains were tenderly laid away in Greenwood Cemetery, Grand Rapids, there to await the glorious resurrection. - Com.
Media Type
Genealogical Resource
Newspaper
Item Type
Clippings
Date of Publication
20 Jun 1907
Last Name(s)
Adams 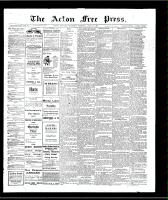