Full Text
SAD FATAL ACCIDENT
An Esquesing Farmer Killed on
the Grand Trunk Railway.
A VICTIM OF WHISKEY.
[Last Thursday morning after we had gone to press and worked off a large part of the edition, the news of the fatal accident reported below, was received, and as the whole of our western mail had been posted, we publish the particulars of the sad occurrence again this week for the information of our western subscribers. - ED. FREE PRESS.]
On Wednesday night, the 15th inst., a very sad accident occurred on the Grand Trunk Railway, about half a mile east of this village, which resulted in the death of Mr. John Scott, a farmer who had lived on lot 24, con. 4, Esquesing, for many years past, and with whom the majority of our readers were acquainted. Deceased left Acton late in the evening under the influence of liquor, and proceeded down the railway track towards home, two miles distant, in company with his son, a young man about 22 years of age. After going a short distance east of the Grand Trunk station, his son, thinking him capable of reaching home safely, left him and went through the fields to a neighbor's where he had occasion to call, and, it is supposed that deceased being overcome with the effect of the liquor, laid down on the track, and a western bound train struck him on the head, fracturing his skull and killing him instantly. The body was found on Thursday morning about 6.30 o'clock by Mr. Robert Elliott, as he was on his way to work at Tolton's mill. Deceased must have been killed several hours before Mr. Elliott found him, as the blood from the wound had frozen in icicles about the head. Dr. Freeman, coroner, was immediately informed of the accident, but after hearing the particulars concluded that an inquest was unnecessary, and the body was then removed to the residence of the deceased by the G.T.R. section men. Deceased was about 50 years of age, and leaves a wife and family. The family have the sympathy of the entire community in their heavy affliction.
The funeral was held on Saturday and the body interred at the Presbyterian cemetery, Limehouse.
Media Type
Genealogical Resource
Newspaper
Item Type
Clippings
Date of Publication
23 Mar 1882
Last Name(s)
Scott 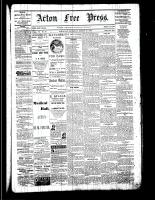