Full Text
DEATH OF MRS. BENJ. ANDERSON.
The illness of Mrs. Benjamin Anderson, referred to in last issue of the FREE PRESS, terminated fatally last Friday morning. By her death Acton loses one of the finest ladies of the community. She was an ideal "mother in Israel." a friend to all who needed help or encouragement, and a mother of the most devoted character. Although she had attained the age of 73 years, she was withal remarkably youthful in appearance and certainly young in spirit.
Mrs. Anderson was the daughter of the late John Carnochan, who came from County Antrim, Ireland, in 1833, and settled in Nassagaweya. Mrs. Anderson was the first member of the family born in Canada. In 1853 she married her late husband, Benjamin Anderson. They resided in Nassagaweya for over 35 years and in 1889 came to Acton. Three years later Mr. Anderson died here.
The members of the family surviving are: Mrs. John Ruddick, Mrs. W. E. Swackhamer and Miss Millie in Acton. Mrs. J. Lawson, Belmont, Man.: Mrs. Chas. Lasby, London and Mrs. George McDowell, Toronto. Mrs. Thos. P. Watkins, who died on the 3rd inst. was also a daughter.
Mrs. Anderson was a member of the Knox Church for many years and was much beloved by the membership generally.
The funeral was held on Monday afternoon. Rev. J. C. Wilson B.A., officiating. The pall bearers were: Messrs. Wm. Anderson, Proton; Robert Anderson, London; Peter Gibbons, Robert Wallace, Wm. McDowell and Samuel Mackenzie.
Among those who attended from a distance were Mr. and Mrs. Chas. Lasby and Robt. Anderson, London; Mr. and Mrs. George McDowell, and Messrs. Benj. and James Johnstone, Toronto, Mr. and Mrs. Wm. Anderson, Proton, and Mrs. (Rev.) H. A. Macpherson, Toronto.
Media Type
Genealogical Resource
Newspaper
Item Type
Clippings
Date of Publication
21 Mar 1907
Last Name(s)
Anderson
Carnochan 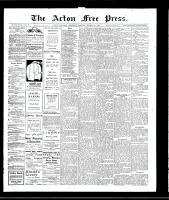